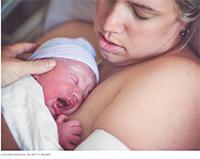 (...) one country that is giving women’s postpartum pelvic health the attention it deserves? France. For decades, the French government has subsidized “perineal re-education,” i.e., physiotherapy that helps strengthen a new mother’s pelvic floor.

“When I gave birth to our daughter last November, my husband and I spent five government-sponsored days in the maternity ward at Clinique Leonardo Da Vinci, where we learned that French hospital meals come with a cheese course and that as part of my postpartum treatment I would be prescribed 10 to 20 sessions of la rééducation périnéale,” writer Claire Lundberg explained in her 2012 Slate essay, “The French Government Wants To Tone My Vagina.”

“This is a kind of physical therapy designed to retrain the muscles of the pelvic floor, including the vagina, and is one of the cornerstones of French postnatal care,” she wrote.

To American mothers, the notion of the government paying for a dedicated pelvic coach might sound, well, insane. And it is indeed...intimate.

“Essentially, you go for your six-week visit and if you have healed adequately, they give you your referral for the ‘reeducation,’” Dr. Dana Gossett, an OB-GYN and professor with the University of California San Francisco’s Department of Obstetrics, Gynecology and Reproductive Sciences told The Huffington Post. “It usually starts in the first couple of months, and it involves Kegel exercises ― that you do with a coach.”

That coach ― a trained physiotherapist specializing in pelvic floor rehab ― helps guide a woman through Kegel exercises, putting his or her fingers into the new mother’s vagina to make sure she is contracting and relaxing her muscles correctly, Gossett explained. Coaches also tend to use biofeedback to ensure maximum results.

Read the entire story in the Huffington Post here.