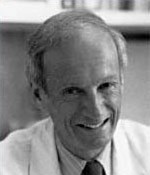 It is with sadness that we announce the passing of Robert Jaffe, MD, a professor emeritus of obstetrics, gynecology and reproductive sciences, and physiology. From 1973 to 1995, Dr. Jaffe served as chair of the department.

Dr. Jaffe was a pioneer in reproductive endocrinology and infertility (REI). He received many honors and awards, including the Distinguished Scientist Award from the American Society of Reproductive Medicine and the Syndey H. Ingbar Distinguished Service Award for numerous contributions to the Endocrine Society. He was former President of the Endocrine Society’s Hormone Foundation, a public education affiliate, later renamed the Hormone Health Network, and was an elected member of the Institute of Medicine (now the National Academy of Medicine) and the Association of American Physicians.

Dr. Jaffe's vision for the Department when he was recruited to UCSF from the University of Michigan was to build an academic obstetrics and gynecology department with full clinical services and a robust research program. He established the Reproductive Endocrinology Center (now called the Center for Reproductive Sciences) and over the years mentored several generations of physicians and physician scientists who became leaders in REI. He also led the NIH Reproductive Scientist Development Program (housed at UCSF) for over 25 years, which has enabled OBGYNs-in-training to have mentored research in basic and translational science with commitments from their institutions to support them as faculty. Dr. Jaffe, along with Dr. Samuel Yen, co-edited Yen and Jaffe’s Reproductive Endocrinology - a key resource for learners and teachers in the field, now in its 8th edition.

Dr. Jaffe will be dearly missed by his many friends and colleagues at UCSF and throughout the world. On behalf of the School of Medicine, we would like to extend our condolences to his family, friends, and close colleagues.

Breastfeeding Stations (for employees only)