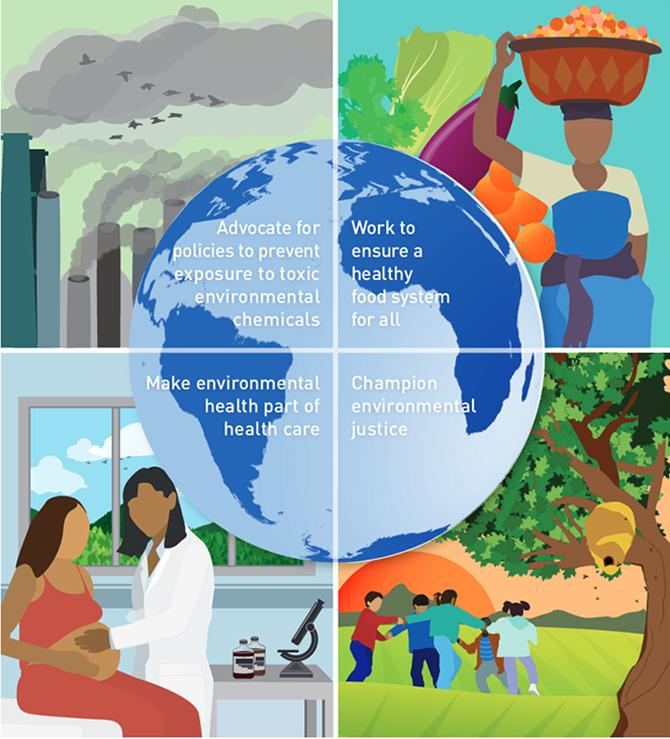 The FIGO opinion was written by obstetrician-gynecologists and scientists from the major global, US, UK and Canadian reproductive health professional societies, the World Health Organization and the University of California, San Francisco (UCSF).

FIGO, which represents obstetricians from 125 countries and territories, published the opinion in the International Journal of Gynecology and Obstetrics on Oct. 1, just prior to its Oct. 4 to 9 world congress in Vancouver, BC, where more than 7,000 clinicians and scientists will explore global trends in women’s health issues.

“We are drowning our world in untested and unsafe chemicals, and the price we are paying in terms of our reproductive health is of serious concern,” said Gian Carlo Di Renzo, MD, PhD, Honorary Secretary of FIGO and lead author of the FIGO opinion. According to Di Renzo, reproductive health professionals “witness first-hand the increasing numbers of health problems facing their patients, and preventing exposure to toxic chemicals can reduce this burden on women, children and families around the world.”

Miscarriage and still birth, impaired fetal growth, congenital malformations, impaired or reduced neurodevelopment and cognitive function, and an increase in cancer, attention problems, ADHD behaviors and hyperactivity are among the list of poor health outcomes linked to chemicals such as pesticides, air pollutants, plastics, solvents and more, according to the FIGO opinion.

“What FIGO is saying is that physicians need to do more than simply advise patients about the health risks of chemical exposure,” said Jeanne A. Conry, MD, PhD, a co-author of the FIGO opinion and past president of the American College of Obstetricians and Gynecologists, which issued an opinion on chemicals and reproductive health in 2013. “We need to advocate for policies that will protect our patients and communities from the dangers of involuntary exposure to toxic chemicals.”

Chemical manufacturing is expected to grow fastest in developing countries in the next five years, according to FIGO. In the U.S. alone, more than 30,000 pounds of chemicals per person are manufactured or imported, and yet the vast majority of these chemicals have not been tested. Chemicals travel the globe via international trade agreements, such as the Transatlantic Trade and Investment Partnership, which is being negotiated between the European Union and the United States. Environmental and health groups have criticized the proposed agreement for weakening controls and regulations designed to protect communities from toxic chemicals.

“Exposure to chemicals in the air, food and water supplies disproportionately affect poor people,” said Linda Giudice, MD, PhD, MSc, a FIGO opinion co-author, past president of the American Society for Reproductive Medicine (ASRM) and chair of the UCSF department of obstetrics, gynecology and reproductive sciences. “In developing countries, lower respiratory infections are more than twice as likely to be caused by chemical exposures than in developed countries.”

Exposure to toxic environmental chemicals is linked to millions of deaths and costs billions of dollars every year, according to the FIGO opinion, which cites the following examples:

“Given accumulating evidence of adverse health impacts related to toxic chemicals, including the potential for inter-generational harm, FIGO has wisely proposed a series of recommendations that health professionals can adopt to reduce the burden of unsafe chemicals on patients and communities,” said FIGO President Sabaratnam Arulkumaran, MBBS, who is also past president of the British Medical Association.

FIGO proposes that physicians, midwives, and other reproductive health professionals advocate for policies to prevent exposure to toxic environmental chemicals; work to ensure a healthy food system for all; make environmental health part of health care; and champion environmental justice.

The FIGO opinion has also been applauded by health and advocacy groups, including the Health and Environment Alliance (HEAL), Women in Europe for a Common Future (WECF), Healthcare Without Harm, and Physicians for Social Responsibility.

The International Federation of Gynecology and Obstetrics (FIGO) is a non-profit organization that brings together obstetrical and gynecological associations from 125 countries/territories worldwide. It is dedicated to the improvement of women’s health and rights and to the reduction of disparities in healthcare available to women and newborns, as well as to advancing the science and practice of obstetrics and gynecology. Based in London, the organization hosts a triennial World Congress that draws more than 7,000 women’s health scientists, clinicians, and other allied health professionals to present the latest science and best clinical practice in obstetrics and gynecology. This year’s XXI World Congress will be held in Vancouver.