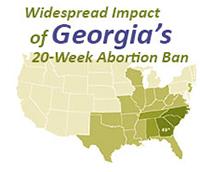 ANSIRH is pleased to announce the release of our latest publication from the Evaluation of Abortion Restrictions Project, "Implications of Georgia's 20-week Abortion Ban," published online today in the American Journal of Public Health (AJPH).

We've also created a downloadable infographic that summarizes the findings of the paper.

The goal of the study was to describe groups of women affected by a Georgia state law that went into effect in January 2013 that prohibits providers from performing abortions after viability. Data were collected from women who had an abortion at or beyond 20 weeks gestation in 2012 and 2013 within Georgia clinics that provide later abortions.

The results of the study showed that women traveled from throughout the South, the Midwest, and parts of the Northeast to obtain post 20-week abortion care in Georgia. This finding illustrates that when a type of abortion care, such as later abortion care, is already scarce in a geographic region, banning it in one state in that region has an impact on women's health and access well-beyond that state.

Georgia was the 10th state to pass a 20-week abortion ban and the first state to pass such a ban where a considerable number of abortions after 20 weeks were being provided. The implications of Georgia's 20-week ban are important to consider because Georgia is one of only two states in the Southeast where outpatient abortion care after 20 weeks is provided. And, prior to part of the ban going into effect in January 2013, Georgia was the only state in the Southeast and Midwest that provided outpatient abortion care after 24 weeks LMP.