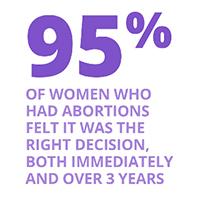 The Turnaway Study announces two publications this month that examine the mental health and emotional consequences of abortion. The first publication, titled "A comparison of depression and anxiety symptom trajectories between women who had an abortion and women denied one," was published in the July issue of the Psychological Medicine. The second study, titled "Decision Rightness and Emotional Responses to Abortion in the United States: a Longitudinal Study," was published today in PLOS ONE. These papers find no evidence of "post-abortion trauma syndrome," which is often cited by abortion opponents as a harmful mental health consequence of abortion.

Anxiety is elevated among women who have been denied an abortion and are still trying to end their pregnancy. But over time, both women who have abortions and women who carry unwanted pregnancies to term have similar — and decreasing — rates of anxiety and depression. We have not found that mental health problems are caused by abortion.

When women who had abortions were asked if they thought having the abortion was the right decision for them, 95% said it was. This was true both immediately after the abortion and over 3 years later. The study asked women about four negative emotions — regret, sadness, anger and guilt. Positive emotions, relief and happiness, outweighed negative emotions. There were no significant differences in women’s emotions about the abortion, or in their belief that abortion was the right decision for them, between women having abortions in the first trimester and those having later abortions. This finding challenges the common assumption that later abortion is more emotionally difficult. Further, the intensity of all emotions decreased for both groups of women and they thought less about the abortion over time.

Please view the downloadable Turn-away Study infographic (PDF), which summarizes the findings of these publications.